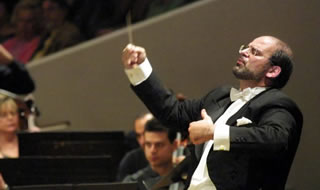 THE APOTHEOSIS OF THE DANCE • THE 7th

Widely regarded as one of the most important Greek conductors, Maestro Myron Michailidis is currently General Music Director of the Philharmonic Orchestra and Theatre Erfurt, Germany, as well as the very first Artistic Director of the new Heraklion Cultural and Conference Center in Greece.

With a repertoire spanning over 250 symphonic works and 40 operas ranging from the Baroque to the Contemporary, Maestro Michailidis is particularly known for his interpretations of Beethoven, Tchaikovsky and Rachmaninoff, as well as the operatic works by Verdi, Puccini, Gounod and Wagner. Throughout the years, Michailidis has collaborated with internationally distinguished musicians such as Paul Badura-Skoda, Salvatore Accardo, Cyprien Katsaris, Aldo Ciccolini, Ivo Pogorelich, Lars Vogt, Shlomo Mintz, Misha Maisky, Vadim Repin, Martino Tirimo, June Anderson, Cheryl Studer, Paata Burchuladze, Fazil Say and Barry Douglas, among many others.

Maestro Michailidis has conducted numerous opera productions at opera houses, festivals and on international tours. Over the years, he has performed with some of the finest singers, stage directors and set designers. He has further led numerous spectacular productions at the legendary Odeon of Herodes Atticus in Athens. In2015 his production of Gounod’s Faust with Eric Cutler, Alexia Voulgaridou, Paata Burchuladze and Dimitri Platanias, directed by Renato Zanella, marked the Greek National Opera’s first DVD release. In 2017 he led a production of La Fille du Régiment at Shanghai Grand Theatre. As Theater Erfurt’s new General Music Director, he has conducted new productions of Carmen (2018), Aida (2019),Rimsky-Korsakov’s Tale of Tsar Saltan (2019), Lohengrin (2020) and Mozart’s Der Schauspieldirektor (2020), as well as performances of Lehar’s Merry Widow (2019). Upcoming productions with Theater Erfurt scheduled for the 2021/22 season include Manon Lescaut and Luisa Miller as well as a new production of Nabucco. In March of 2021 Michailidis was scheduled to conduct Norma at The Göteborg Opera, a production that unfortunately had to be cancelled due to the pandemic.

Following his piano studies with Dimitris Toufexis in Athens, Michailidis studied conducting with Hans-Martin Rabenstein at the Universität der Künste Berlin, and participated in Master Classes by Miltiadis Karydis and Simon Rattle. He also holds a law degree from the University of Athens. 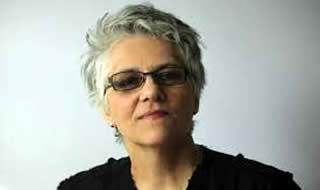 Born in Val d´Or, Province of Quebec, Linda Bouchard has been active for over 40 years as a composer, orchestrator, conductor, mentor and researcher. Bouchard is the recipient of the Composer of the Year Award from the Conseil Québécois de la Culture (1998), the Joseph S. Stauffer Award from the Canada Council for the Arts (1999), the Davidson Award (2017) and several SOCAN awards (1983, 1984, 1986). Her honours in the United States include first prizes in the Princeton Composition Contest (1992), Indiana State Competition (1986), National Association of Composers USA Competition (1981), and the Fromm Music Foundation Award from Harvard University (2006) .

Her works have been recorded in Canada by the CBC, Analekta, Marquis Classics and CMC Labels; in Germany by ECM and in the United States by CRI and Bang on a Can.

In 1977, Bouchard went to the United States to study with Henry Brant and lived in New York City from 1979 to1990. In 1991, Bouchard returned to Montreal and took up the post of composer-in-residence (1992-95) with the ''The National Arts Center Orchestra” in Ottawa. In 1997, she moved to San Francisco, California.

In 2018, thanks to a grant from the Canada Council for the Arts, she pursues her “Live Structures” project.

The Coriolan Overture was composed in 1807—between symphonies 4 and 5—a particularly labour-intensive period in Beethoven’s compositional life. It was music written to preface the five-act production of Coriolan, a play, not by Shakespeare as is often assumed, but by Austrian dramatist Heinrich Joseph von Collin. The play was a discourse on individual freedoms and responsibilities, telling the story of the Roman General Caius Marcius Coriolanus, a brilliant military leader. The ethical conflict that is the centre of this play is what Beethoven used to write his overture: interaction between the general’s prideful wrath and the heroic entreaties of his mother Volumnia, two contrasting themes which Beethoven utilized to maximum effect. He completed the overture in a mere three weeks, a composition that like his other overtures, was intended to stand on its own, a separate symphonic work.

Music historians are always in speculative search mode; some have argued that Beethoven identified personally with Coriolanus because of the composer’s often intemperate relationship with those close to him. Coriolanus’ self-centred pride, his strong will and the tension these traits created seem to manifest themselves in the intensity of the overture. It has even been suggested that Beethoven transferred his thoughts about Coriolanus to his unfavourable feelings about Napoleon Bonaparte—the utter tragedy of misused power, particularly evident in the overture’s finale

It’s of some interest to note that the music heard during Von Collin’s play was from Mozart’s opera Idomeneo. Beethoven’s Coriolan found itself in good company

Born and raised in Quebec, Ms Bouchard received her BA in music in 1979 and a Masters Degree in1982. In 1999 she received first prize for “Composer of the Year” from the Quebec Cultural Council and the Stauffer Prize from the Canada Council for the Arts. She currently lives in San Francisco with her husband and son.

Throughout her career as teacher, composer and conductor she has experimented with a variety of “spatial placements” of music. Spatial music is the placement of movement of sounds through space, music that intentionally exploits sound location as a composed aspect of the work. It is most often associated with 20thCentury electroacoustic music.

“Vertige, completed in 1995, was commissioned by the National Arts Centre Orchestra. It  was composed “using the orchestra as a virtuosic instrument capable of agility and power. The inspiration lies in the variety of rhythms and shapes found in nature, from absolute order to saturated chaos. Examples might be the unpredictability of a flock of geese or the patterns of birch trees in a forest.”
‍

By the time Beethoven’s first symphony was sketched in 1795 he was well acquainted with the music of Haydn and Mozart. Haydn, his composition teacher, had already produced 49 symphonies; Mozart had completed his Salzburg symphonies and was working on his later ones. In the light of these masterpieces it is not unlikely that Beethoven was somewhat intimidated at the completion of his first symphony. Also not surprising is the appearance in that work of the compositional character and style of both Haydn and Mozart. It would be hard to deny the influence of such musical luminaries

The work was dedicated to Baron Gottfried van Swieten, an Austrian diplomat and enthusiastic amateur musician. During his time as a government official, he became patron to several composers including Haydn and Mozart. His choice of Beethoven came about after hearing the premiere of his first symphony in April, 1800. The premiere was successful to the point that critics hailed the 27-year-old Beethoven “the successor to Haydn and Mozart, a voice of the future.”—an indication that aside from the obvious structural similarities to the work of his two teachers, the Symphony no.1 was uniquely Beethoven, a new force on the musical landscape.

The symphony is in the traditional four movements. In the beginning Allegro can be heard the Haydn-Mozart influence; however, that formation soon changes indicating a new direction, a portent of things to come.

The Andante second movement promises Beethoven’s sense of the dramatic, a characteristic of so much of his later work.

Movement three, although marked Menuetto, moves at a pace so fast it is hard to label it anything other than a Scherzo

The finale is an Adagio-Allegro where is heard an unmistakable tribute to his predecessors—"Do not tear the laurel wreaths from the heads of Handel, Haydn and Mozart; they belong to them—not yet to me.”


Ludwig van Beethoven
Symphony No.7. Op.92 in A major

Beethoven’s inspired 7th Symphony was written in Teplice, Bohemia where the composer had taken up residence in hopes of a cure for his encroaching deafness. The work premiered December 8, 1813 in Vienna with the maestro himself at the podium. Among the orchestra members were some high profile musicians of the day including violinist Louis Spohr and composers Giacomo Meyerbeer and Antonio Salieri. The piece was very well received with Beethoven commenting, “they (the players) played with great fire and expressive power”. Several years later, Spohr was to remember that “Beethoven's antics on the rostrum as a sforzando (strong, sudden accents)…he tore his arms with a great vehemence asunder ... at the entrance of a forte he jumped in the air".

After a slow introduction, the first movement—a sonata form—is dominated by lively dance-like rhythms. The second movement in A minor is marked allegretto. The rhythmic figure of a quarter note, two eighth notes and two quarter notes is heard repeatedly. The third movement is a scherzo followed by a trio and is based on an old Austrian pilgrims’ hymn tune. The last movement, also in sonata form is known, as one critic put it, for its “Bacchic fury”.

The symphony is infused with rhythmic devices. Critics and listeners alike have often been swept up, stirred by its subtle, tonal use to create tension and inspiration. One of the 7th’ greatest proponents, Richard Wagner, referred to it as the “Apotheosis of the Dance”. However, it has not always been met with admiration; the great 20th Century conductor Sir Thomas Beecham remarked, “What can you do with it? It is like a lot of yaks jumping about”.
‍