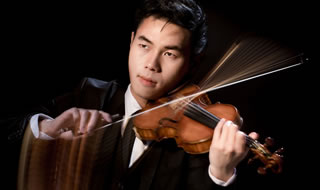 The rich and seductive music of Max Bruch’s Violin Concerto No.1 is an indulgence for the music lover. A feast for any orchestra enthusiast follows the concerto: the exceptionally powerful and beautiful Symphony No.6 by Anton Bruckner—an evening of classical symphonic music mastery.
Symphony No.6 in A major, WAB 106
Intermission
Violin Concerto No.1 in G minor, Op.26
‍Timothy Chooi, violin soloist
Max BRUCH
Anton BRUCKNER

Powerful and finely nuanced interpretations, sumptuous sonorities, and a compelling stage presence are just a few of the hallmarks of internationally acclaimed violinist Timothy Chooi. A popular soloist and recitalist, he is sought after as much for his passionate performances as for his wide-ranging repertoire. Recent honors include Second Prize, Belgium’s world-renowned 2019 Queen Elisabeth Competition, First Prize, the 2018 Joseph Joachim International Violin Competition in Germany, and the First Prize, the 2018 Schadt Violin Competition in the USA. Recently he was the recipient of one of Europe’s most coveted prize, “Prix Paternot” which recognizes a promising and accomplished international artist at the prestigious Verbier Festival in Switzerland.

Chooi's most recent artistic collaboration was a tour with Anne-Sophie Mutter and the Mutter Virtuosi where they performed across Europe's most notable concert halls such as the Musikverein in Vienna, Théâtre des Champs-Elysées in Paris, and the Berlin Philharmonie. Recent performances include engagement with Luxembourg Chamber Orchestra, Toronto Symphony Orchestra with Peter Oundjian and a live on-air recital on New York City’s WQXR classical radio station; and recital tours across Europe, North America and Asia. In addition, Chooi has also collaborated with Brussels Philharmonic under Stéphane Denève, with Santa Barbara Symphony, Orchestre Philharmonique de Liége, Auckland Philharmonia Orchestra, and the Malaysian Philharmonic Orchestra.

In addition to his awards, Timothy Chooi’s numerous honors include the third prize at the 2015 Michael Hill Violin Competition in New Zealand and Grand Prize at the 2010 Montreal Symphony Manulife Competition in Canada. He was a laureate at the 2014 Menuhin International Competition and the recipient of the Vadim Repin Scholarship Award in New York City.

In addition to his performing career is a founding member of The VISION Collective, a three-year-old ensemble of musicians and composers that utilizes music to highlight refugee and immigrant voices and stories, raising awareness for the global refugee crisis, and brings together individuals from all walks of life together to create diverse and meaningful art. This ensemble was the recipient of the 2020 Harold W. McGraw Family Foundation's The Robert Sherman Award for Music Education and Community Outreach.
Chooi studied at the Juilliard School under the tutelage of Catherine Cho. His mentors include Anne-Sophie Mutter, Pinchas Zukerman, Patinka Kopec, Ida Kavafian, and Pamela Frank. He recently graduated from Juilliard’s prestigious Artist Diploma program and the Professional Studies program at the Kronberg Academy with Christian Tetzlaff.

An avid educator with a passion for sharing his international experience with young musicians, Timothy Chooi is the Professor of Violin at the University of Ottawa. He performs on the 1717 Windsor-Weinstein Stradivarius on a generous loan from the Canada Council for the Arts and the 1709 "Engleman" Stradivarius on loan from the Nippon Music Foundation in Japan. 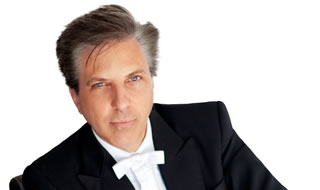 Born in Montreal of Italian lineage, Marco Parisotto is among Canada's foremost conductors on the international scene. A guest with orchestras around the globe, with unrelentingly high standards of performance, he continues to thrill audiences with his passionate music making. He is the winner of seven major international competitions and crowned these achievements at the1997 “Besançon International Competition for Conductors”, being awarded both the Grand Prix as well as the Prix du Public - a historical first at this elite event.

As Artistic Director of the Ontario Philharmonic (OP), a title he has held for over two decades, he has earned praise for the orchestra’s development and adventurous performances, and he is credited with building OP to the high standard it enjoys today. Under his leadership, Ontario Philharmonic has received superlative audience and media recognition.

“…a fantastic orchestra [Ontario Philharmonic] being led by a first-rate conductor” • Musical Toronto.

Marco Parisotto’s close association with orchestras is manifested through the strong relationships he has maintained with ensembles under his leadership. In 2013, he was unanimously elected as Music Director of the Jalisco Philharmonic, transforming this ensemble into one of Latin America’s most distinguished orchestras. Under his direction, the Jalisco Philharmonic garnered international attention with its virtuosic performances and participated in recordings, tours, international festivals and major events such as Operalia, The World Opera Competition. During his tenure, the orchestra undertook major concert tours eliciting great critical and public acclaim as they visited Germany, Austria, the USA and Mexico in leading concert halls of Berlin, Munich, Essen, Vienna, Los Angeles, San Francisco, Busan and Mexico City. As well, through Maestro Parisotto, the orchestra completed significant commercial recording projects, starting with the Philharmonic’s first release under the SONY Classical label.

“Amidst this exciting pillar of sound growing constantly, stands Marco Parisotto. Under his control, directing the orchestra with the greatest finesse, like an architect he gives precise instructions that develop into a majestic edifice of sound…  He ingeniously manages the full spectrum of colors of his orchestra… We hope that this fantastic orchestra with this dynamic conductor will visit our German concert halls more frequently, bringing with them their style of spicy and fiery music-making.” • Klassik Begeistert, Raphael Eckardt

Following a special concert celebrating Canada-China relations in 1999 at the Grand Theatre in Shanghai, Marco Parisotto was appointed Principal Conductor and Artistic Advisor of the Shanghai Symphony Orchestra, a position he held until 2003.

Marco Parisotto has won critical and public praise for his interpretations of the great Austro-German repertoire - as R. Strauss, Bruckner, Wagner, and as an avid Mahlerian. He has also been acclaimed for his readings of Russian masters as Tchaikovsky, Shostakovich, Stravinsky, and for his passionate performances in the operatic field. He has led productions including, among others, Pagliacci, Cavalleria Rusticana, Carmen, Otello, Madama Butterfly, Tosca, La Boheme, Aida, Rigoletto, Don Giovanni and Turandot.

“The star of the evening was without a doubt Marco Parisotto…inspired, passionate and in a virtual state of grace, impressing a supreme flow and agility to this extremely challenging opera [Puccini’s Turandot].” • Opera World.

Marco Parisotto is the winner of seven important international competitions. Aside from his noteworthy awards at the prestigious Besançon Competition, joining the ranks of maestros like Seiji Ozawa and Michel Plasson, other top prizes have included the Tokyo International Conductors' Competition in Japan, Constantin Silvestri Competition in Romania and the Antonio Pedrotti in Italy. He was moreover honored with all other special awards at these events.

He took his training both as a violinist and pianist and studied conducting with eminent maestros including Leonard Bernstein, Carlo Maria Giulini, Leonard Slatkin, Charles Brück, Yuri Temirkanov, Georg Tintner and, initially, with Raffi Armenian at the Conservatoire de Musique du Québec in Montreal.
‍

Max Bruch (1838-1920)
Violin Concerto No. 1 in G minor
‍
On June 28, 1906, Max Bruch’s close friend, the internationally famous Hungarian-born violinist Joseph Joachim, celebrated his 75thbirthday. During the celebration the subject of music arose, and Joachim, speaking from a position of unquestionable authority, was quoted as saying,
“The Germans have four violin concertos. “The greatest, the most uncompromising, is Beethoven’s. The one by Brahms vies with it in seriousness. The most inward is Mendelssohn’s. The richest, the most seductive was written by Max Bruch.”

The concerto premiered in 1866 and the composer, after hearing it, realized several parts of the score needed revision which he began with the help of violinist Joachim. The result is the version heard in concert halls today, one of the most admired violin concertos in the entire classical repertoire. It is considered the composer’s most famous work alongside his often recorded Scottish Fantasy.

As is the case with many great classical masterpieces, Bruch’s G minor violin concerto has an interesting history. Due to economic chaos following World War I the composer was unable to collect royalties owed to him for his published works, and found himself in extremely impoverished circumstances. Desperately in need of money he sold the concerto score to a publisher for a meagre sum, far less than what it would eventually earn. He did, however, keep one copy of the score which he sent to the U.S. to duo pianists Rose and Ottilie Sutro, with the hope they would sell it and send him the money. Instead, the two women kept the work, telling Bruch they had sold it. Shortly thereafter the composer died without receiving a single penny for his masterpiece. His autographed score now resides in the Pierpont Morgan Public Library in NYC.

One, single luminary became the inspiration for Austrian composer Anton Bruckner’s entire compositional output—German composer and conductor Richard Wagner. Such was Bruckner’s adoration of Wagner’s work he would “fall to his knees” in Wagner’s presence addressing him as “Master”. He was unable to visit Bayreuth after Wagner’s death without visiting his grave where he would stand and weep.

The result of this devoted admiration left an exacting imprint on Bruckner’s music. Like Wagner his symphonies are works of enormous design and expanse. Like Wagner he wanted his symphonies to make monumental leaps toward grandeur. He was influenced and at the same time he imitated.

Bruckner referred to the sixth symphony as his boldest. It did not undergo nor need the rigorous reworking that his other symphonies were subject to - there exists only one version of the work.

There can be no question about Symphony No.6’s beauty. BBC broadcast critic Robert Simpson commented that the work “makes an immediate impression of rich and individual expressiveness: its themes are exceptionally beautiful, its harmony has moments of both boldness and subtlety, its instrumentation is the most imaginative [the composer] had yet achieved, and it possesses a mastery of classical form that might even have impressed Brahms”.